It’s one of many overused phrases in our culture, that, once full of possibility, have become slogans that sell everything. (especially cars)  But… nevertheless… I have to start this post with these words:

It is not the destination.
It IS the Journey.
Here I am.  50 years old.  Still figuring out what painting means to me.  Well, not in every sense.  Not in the deep down in my gut way, the way it has pulled me deep down into my interior… in that sense I’ve always known.  But understanding the relationship between me and painting and the world, that’s another story. 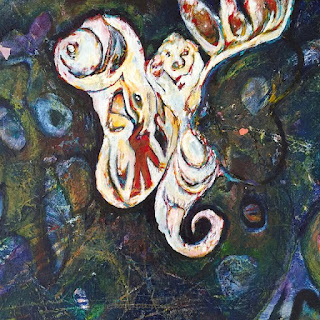 I finished another painting this morning.  I thought it was finished a few days ago, but I was wrong.  That happens a lot.
Here’s what it looked like two days ago: 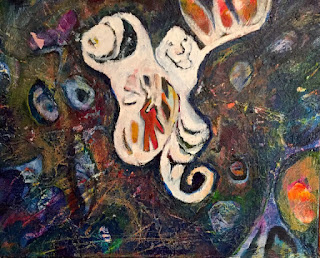 Not too different, but not quite right.  Quite right is a very understated emotional moment when I have pulled out everything the painting is able to give me.  I just know it, if I’m paying attention.  Paying attention to what?  Paying attention to the painting, while equally paying attention to my gut. By that I mean a feeling deep inside.  A deep feeling that is truthful, not “nice” not “pretty” not what I necessarily “want” to hear.
I believe Truth is something you feel.  It’s a heavy and quiet feeling that slows down my breathing and centers me.  I know it and I trust it.  The more I practice this the more I have no need to react to anyone else’s “truth” and, therefore, I find it easier to be in the world without being swallowed up by the world.
This is why I paint.
I looked back at the photos I took of this painting in it’s many stages of development.  As it evolved it had many looks, and some are probably more appealing visually that the final product.  Luckily for me I have no longer set my sights on painting for profit.  I’m not worried about what other people want, what would be prettier, more pleasing and more trendy.  What I’m worried about is pulling something out of a painting. Something that is inside of me, something that is in the air around me. Something in between me and all the forces outside of this body and mind I reside in.

This is how it started.  A grid and a wall and couple of cats and a man.  He’s reaching for a tree.  And that tree, reaching out of the ground, reaching, like the man.  And walls, rooms, spaces… keeping everything separate and trapped and safe.  And a ceiling that has stopped the tree from reaching any further.  It might look pretty, but it’s got to be resolved, because I know there’s a problem that needs to be solved, a question to answer.

How I get to that answer is to just keep going.  In the beginning I just let myself act on intuition.  To look, respond, look again and respond again.  And on and on again.  I’m in this state of consciousness that is everything but literal, linear and verbal.  I can look back on it and tell you what I did (in this case I defined what I was seeing with black lines)  but at the time I probably couldn’t explain it.  Just doing.  With paint

By day three I realize there’s something bigger than all the little parts.  I try to pull that out, with shadows.  At this point I thought it might be figure, just the head and shoulders.  A larger version of the little man, keeping everything else contained within itself.  The grid has become an animate living thing, which still has elements of the grid inside of itself.

And then that being, be it a man, a woman, god, mind… whatever that was it has been swallowed up by the parts again, but this time the grid has become an organic web.  This was a really pretty part of the journey.  I wish I had taken a better photo.  I think in the future I will set up a good camera with a tripod and be ready to capture these stages in a good high res file… just in case I want to print it up really large and enjoy this part.  It is a beautiful place.  I liked being there.

Day five, the image takes a radical turn.  No longer moving through the larger plane of the world, a path has been chosen.  The original character, the “subject” of this painting, has entered a new and protected space.  The space, inside of himself, is isolated but bright.  He’s no longer swallowed up by the structure of the grid, nor the constant movement of the web.  He has a focus and stillness that was lost.  He is ready for transformation from within.

In day six he begins to see the web that he is.  His own little cocoon begins to form a body and he is no longer a small little man but a little piece of something else that is just being born.  His body becomes part of a pattern, of something larger, something that is not yet itself.  I lost focus for a little while here and indulged in all the other busy things happening in the painting.  All the other busy things are just similar stories unfolding, all at once.  Every living thing that is born on this planet starts out like the first single cell organism to divide and, within itself, discover the endless nature of life.  I felt like I may have taken a giant step backwards, getting all caught up in simple forms when I thought I was already past that.  This part of the painting was a struggle.

The struggle is not to be avoided.  I seem to have to learn this over and over.  I want to curl up under a blanket and turn on Netflix and think about fake little worlds and dramas that are easy and entertaining. Metaphorically I have done this many times.  And literally.  But this painting keeps telling me this, “Come back,  attend.  The movement and the stillness and the looking and the thinking keep it going, keep it evolving and this is why you paint.”

That little red man wants to stop, he wants to hide and he wants to sleep, but he keeps reaching and he becomes a pattern on the wing of a butterfly.  The butterfly needs him to let go, in order to break out of its chrysalis.  It doesn’t need him to hold on and be “strong.”  It needs him to change with the other changes that are happening all around him.  Not to be frozen in time, not to be afraid, not to be lazy, stubborn or proud.  Not to follow and not to lead, just to evolve.
He doesn’t let go, he is unable to.

And I realize that this story has been told, it has been pulled out of me.  The butterfly is frozen because the man could not let go and this is not a happy ending.  But it is not really an ending.  It a painting and it is one of many, I hope.  It is a lesson and I like lessons.

And that is why I paint.