The Tiger and the Swan

Authors note: I wrote and illustrated this story over 15 years ago. I never really did anything with it except to send it to one publisher and read it to the Quaker Friends Sunday School, and to my elementary students in Washburn, WI.  Some recent events made me decide to share this story.  It was written by my younger self, but I still like the lessons.   Enjoy and share if you want to, print it if you like.  It is a gift to you if it is a story that speaks to you.

Every year, in the special place where land and water meet, mother ducks wait patiently on their nests, while the earth springs to life all around. 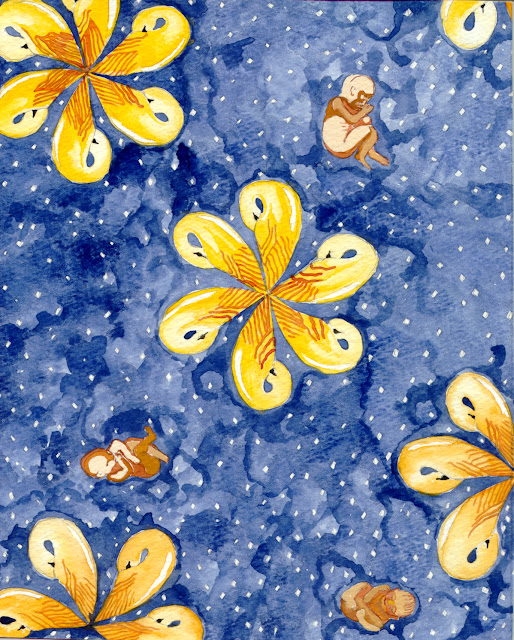 One lucky mother duck was the proud parent of three handsome yellow ducklings.  But there was one egg left in her nest that didn’t stir at all.  Mother Ducks are loyal, like mothers should be, so she continued to wait, and wait, and wait, for the big egg that sat perfectly still.
One morning, mother duck felt the earth rumbling beneath her.  Up she jumped!  Lo and behold, the big egg was bobbing and twisting and crackling and crumbling.  Out came the most horrendous looking duckling she had ever seen. 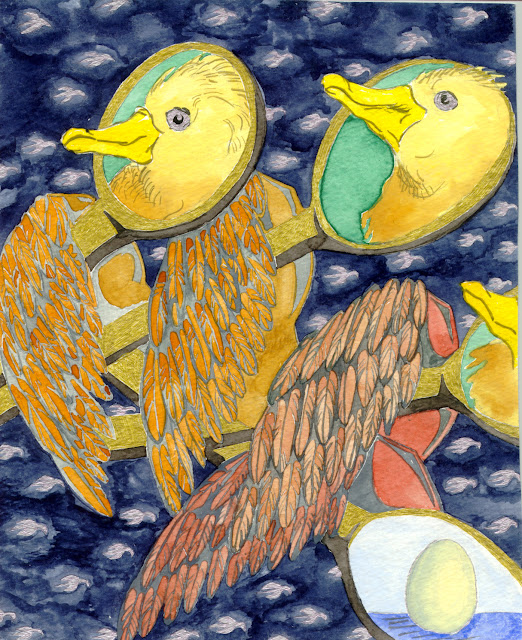 “Looks aren’t everything,” she mumbled as she pushed the big duckling out of the nest and into the farmyard.  Every creature, big and small, two and four legged, feathered and furred, laughed and laughed.
“Well, you are rather unusual,” she took a critical look at the strange creature that had hatched in her very own nest.  “Could it be that you are not a duckling after all?”
A big tear rolled down the duckling’s face.  It didn’t make him look any more attractive.  But if mother duck could have seen his heart breaking, she never would have said such words. 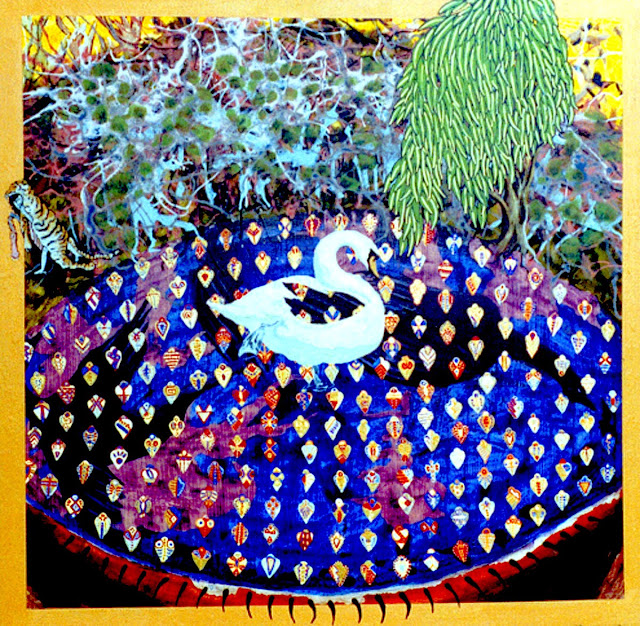 Sometimes people, and animals, don’t understand just how much words can hurt.  The words the duckling heard that day caused so much pain inside he ran and ran.  He felt that if he could run fast and far enough he would run away from the pain.  When he was too exhausted to move another inch, he collapsed at the bank of a deep and dark lake.  Too tired to keep his eyes open, he dreamt a strange and beautiful dream of big white birds breaking through the black sky of night. 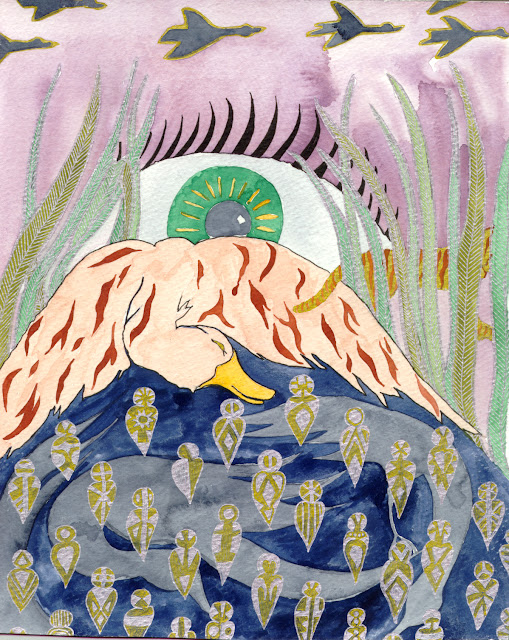 That deep dark lake seemed to call to the Ugly Duckling, so he stayed there for days.  And the days turned to weeks and the weeks turned to months.  All the while he spent his time hiding from wild dogs and raccoons and searching for little bits of food here and there.  When a young bird is all alone in the world, life is a hard thing to hold on to.  Still, something made this brave duckling hold on, even as the days grew shorter and the north wind snuck up behind him. 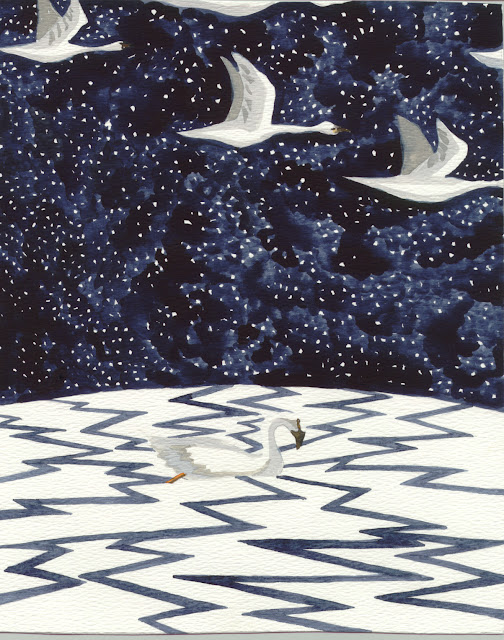 It was one of these cold dark afternoons when the duckling saw a flock of big white birds fly overhead.  Their calls pulled at something deep inside of him.  As they flapped their powerful wings, he swam out further and further into the deep dark cold water.  As the birds disappeared over the trees, he noticed he was much further out than he had ever been before.  Paralyzed with fear, he floated in the icy water as it slowly froze around him.  That night he dreamt he was being called away to a warmer place.  He was so tired of fighting to stay alive, so tired of being cold and lonely and hungry. 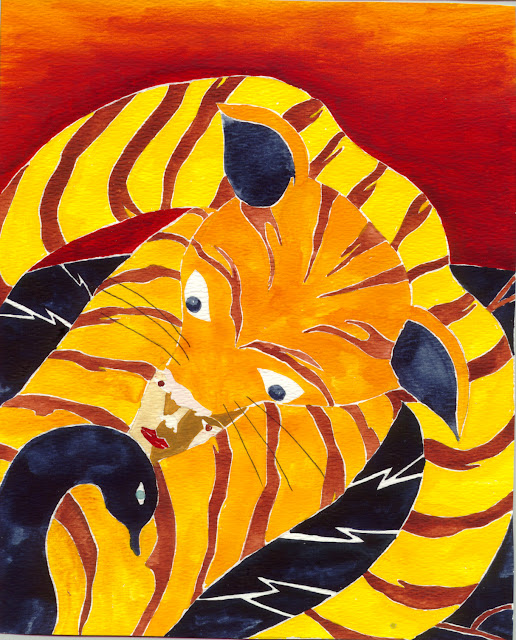 You can imagine the duckling’s surprise when he woke the next morning and was still alive!  Standing over him was the strangest looking creature.  It was bigger than any dog he had ever seen, and its thick coat of fur was covered with flames of orange and yellow.
“I should run away from this fierce beast,” he whispered, but the warmth from the strange creature melted him right out of the ice, and he was no longer afraid. 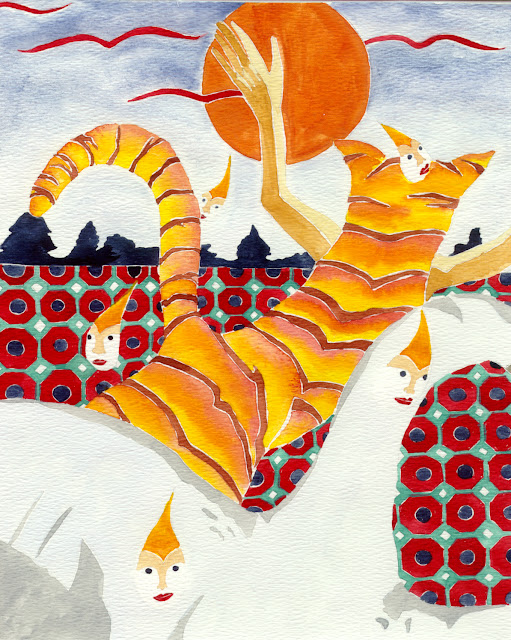 And that was the beginning of a most unexpected friendship.  Who would have ever thought that a tiger and a duckling would enjoy each other’s company?  Perhaps when a duckling does not realize that he’s not a duckling, and a tiger does not realize that she’s not a tiger, perhaps then they don’t know any better than to like each other.  The rest of the winter did not seem cold at all, as they traveled and played together.  Every night they would snuggle together for warmth and dream. 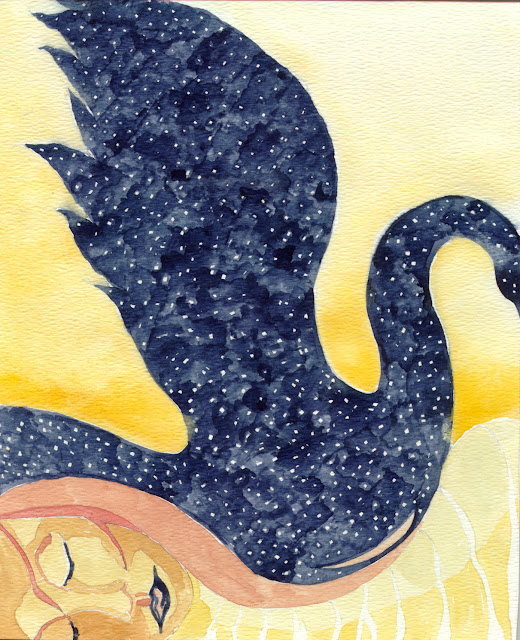 When it seemed as if spring would never arrive, the warm sun melted the last icicles from the roof tops and crocus bulbs poked their little heads out of the muddy ground.  Duckling and tiger danced and spun and rolled on the soft earth laughing.  The friendship these two shared had caused them to forget the hardships and fears that brought them together.  And, it seems, they had also forgotten what they were running from in the first place. 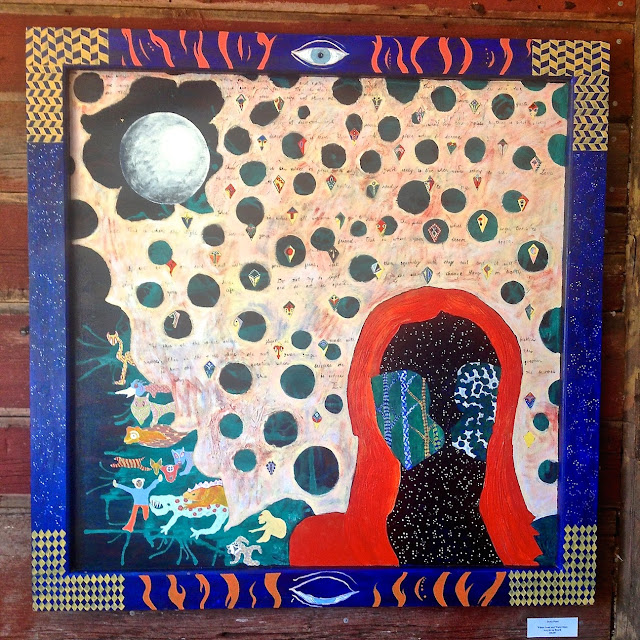 That is why the young girl under the tiger skin felt brave enough to peel away the heavy fur that had covered her all winter.  Duckling gasped as his furry friend slowly transformed into a young lady.  She sat him down, and began to tell the duckling an amazing tale. 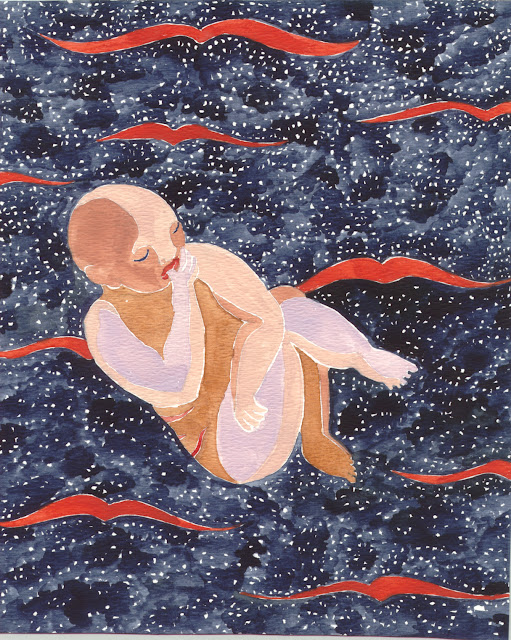 “One day,” she began, “there was a beautiful woman in a big house with a handsome husband.  She thought her life was perfect, as she filled it with all the things she felt she was missing.  Then one day she discovered she was going to have a baby.  This, she believed, would make her life even better.  One night the woman had a dream.  She dreamt of big red birds, breaking through the black sky of night.  The next day her baby was born. “Everything went well for the mother and her child.  She was a very proud mother and she loved to show off her baby to anyone who would look.  Even as her child grew older, she took her into town to make sure everyone could see with their own eyes that she was even more lovely than the day before.  That is, until something very strange happened.  One morning when the mother was helping to dress her child she noticed long red marks on her back.  She could not understand how they got there or even how long they had been there.  She was sure the people would be shocked, so she insisted that her daughter keep her back completely covered at all times.  The young girl soon learned to be ashamed.” 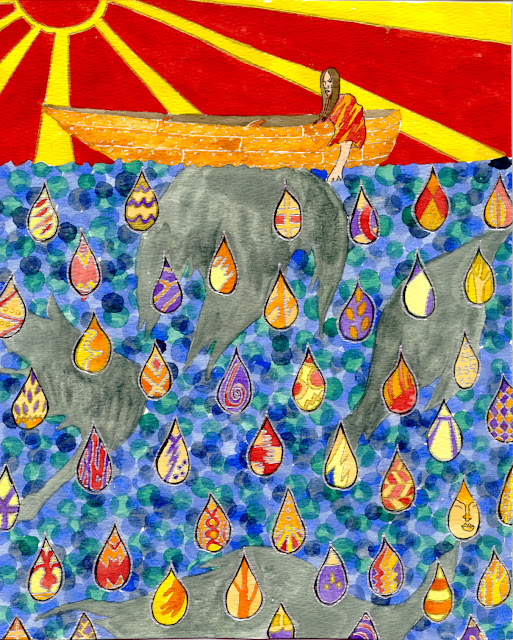 “Shame kept that girl hidden inside her parents house for days.  And the days turned to weeks and the weeks turned to months.  She longed for the fresh air and sunlight.  Afraid to be recognized, she covered herself with the biggest heaviest thing she could find, the fur of  the Great Bengal Tiger, that her grandfather had hunted in India.   First she wore the fur out into the yard.  Then she wore it down the street.  When she finally went into town, the people stepped aside exclaiming, “Let the Great Tiger pass.”  She herself began to forget who was underneath the heavy fur.”
“But your friendship has helped me to remember,” she whispered, as she pulled the fur off of her head and felt the cool breeze soothe her neck. 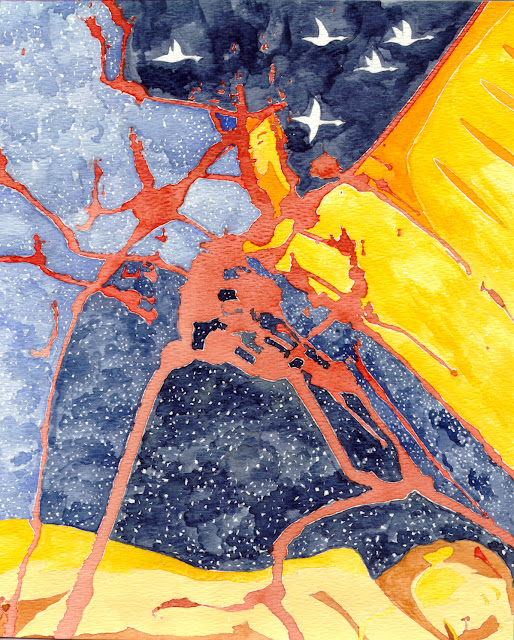 Duckling looked at his dear friend without her tiger fur.  All he could recognize of her was the soothing sound of her familiar voice.  She seemed so small and pale, and yet strong and beautiful.
“You’re no tiger!” his voice came out squeaky and strange.
“And you’re no duckling.”
In the warm reflection of his friend’s eyes he saw himself for the first time.  He was a beautiful white swan.  Only in his dreams had he ever imagined a bird so lovely. 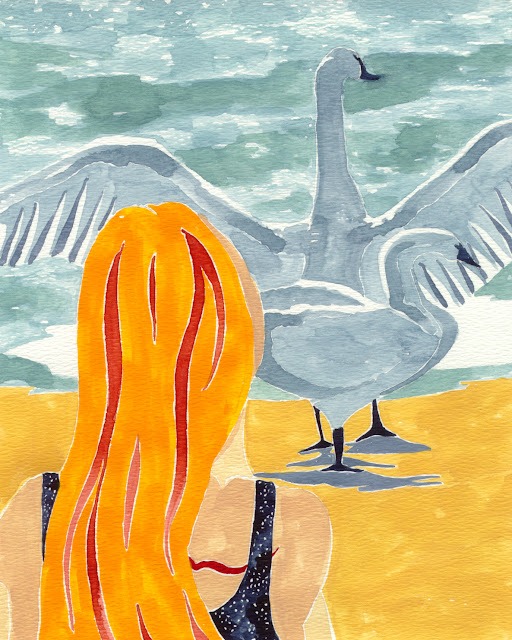 The young swan felt nervous and the young woman rose from the riverbank, leaving her fur at a bundle at her feet.
“Where are you going?” he pleaded.
“I am going home,” she replied.  “And you have somewhere to go too.”  She gestured to the sky, where a flock of swans were returning to the lake.
“But how will I live without you?” he was beginning to cry.
“You will fly through the sky and swim over the water.  With me you would always be stuck on the shore.  I will come back every spring to see how you’ve grown.  Promise you will look for me.” 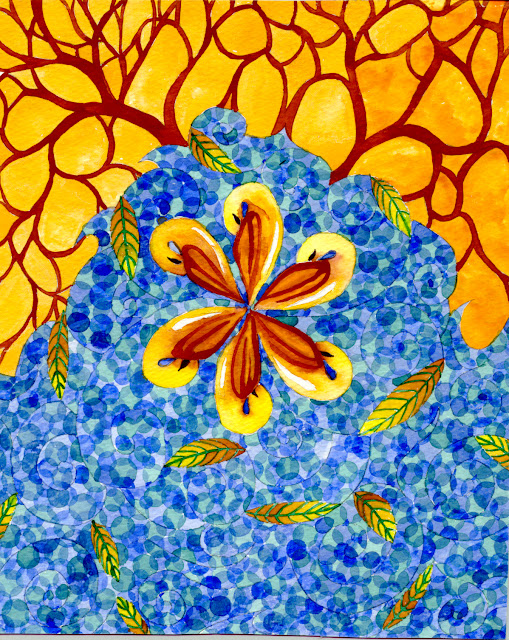 The two friends made a promise.  And every year, in the special place where land and water meet, they keep their word.